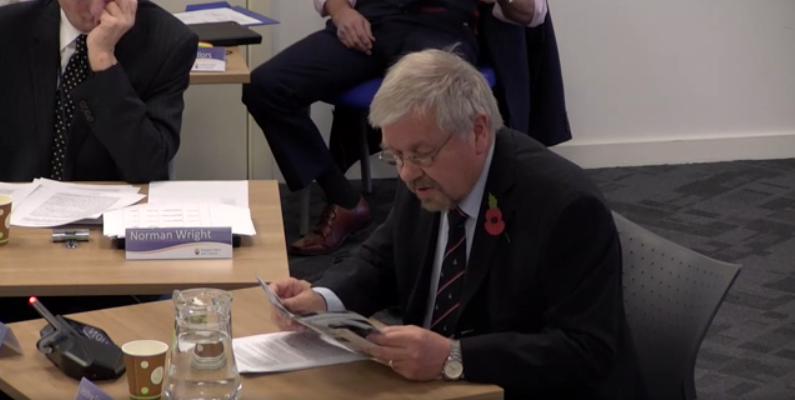 Redrow’s controversial plan to build a further 276 houses in Hartford has been rejected by a vote of 5 – 4 at Cheshire West and Chester’s planning committee meeting in Chester yesterday. Councillor Phil Herbert, representing Hartford Parish Council, writes:

I felt proud to be able to represent Hartford Parish Council at the Planning Committee meeting today. Our Neighbourhood Plan, once again, carried weight and influenced the committees decision to refuse the application.

Click here to watch Phil’s submission statement on behalf of Hartford Parish Council, and the planning committee take its vote.

I was pleased to see that the information I obtained under Freedom of Information regarding the Northwich Transport Strategy was of value too.
We may have won the battle but, past experience tells me, we must prepare for all out war from the developer. However, rest assured, the parish council will be prepared and arm itself with hard evidence that proves further development will be so wrong for our village.
Comments are welcome at the bottom of the page.

In 2016, Cheshire West and Chester Council commissioned Mott MacDonald (experts in their field) to carry out and draw up the Northwich Transport Strategy.

The resulting report, which cost the council £162,000 consists of 125 pages and is based on evidence gathered under strict and recognised scientific method (Traffic Analysis Guidance which is a government standard).

The NTS is far too long and detailed for me to go through here. However, fortunately for us all, they provided a condensed summery that I can refer to. I quote directly:

The future capacity of the road network is of concern due to the number of substantial developments planned or currently under construction.

There are a number of corridors experiencing congestion e.g. the A559 Hartford corridor experiences severe levels of school related congestion.

There are concerns about poor air quality for residents in areas of congestion.

The full report is much more detailed of course, and identifies specific pinch points in Hartford.

Yesterday you were issued with a late information report (very late) although I raised these matters weeks ago in my submission to the planning portal. Aware that this issue was to be raised, the planning officers have attempted to parry the detail set out in the NTC.

The NTC is a study that was carried out under central government approved strict scientific method and control, taking a year to complete. The planning officer states that the document is in a draft form. He also states that the Environmental Protection Team ‘consider that the proposal would not give rise to significant adverse impact.’

What are we dealing with here? A science based study vs a ‘consideration’?

A science based study that states there is already a traffic problem in Hartford vs ‘Its only in draft form’?

We’re dealing with the health and welfare of our residents here – especially the very young and the elderly. Parents are worried about walking their children to school.

Also, I wish to remind you that the Hartford Neighbourhood plan has been made and adopted – this should be given due weight.

The parish council have submitted a strong objection to this application which, owing to its length, and the limited time I have here, I will have to trust you all have read.

The Planning Officer has also submitted a condensed version to you in his report, and this covers the headings to the NP and LP policies to which the application is in conflict.

I’ve mentioned hard infrastructure, please consider also the soft infrastructure problems (related to both the extant and the proposed development).

There has been no improvement in the health and environmental infrastructure since the commencement of development on this and related sites – in fact the situation is one of progressive deterioration; there are no GP or dental services or ancillary services – patients having to register with a doctor as far away as Barnton.

The Parish Council had meetings with the relevant Medical Officer and were informed that that there would be no future plans for a medical centre in the area, and that satellite surgeries were being discouraged. With the growing population in the area the situation, as it stands, is heading for a crisis point.

In summary: There is a problem with traffic congestion and the resultant air pollution – you have the evidence; please refuse this application.